Valley of Fire is one of those places that exceeded my Instagram expectations. When we were planning our winter break RV trip and decided to stay in Vegas for Christmas (because of course), I knew we had to add Valley of Fire to the itinerary. While it’s a doable day trip from Vegas, we wanted to stay closer so we didn’t have to rush back to the dogs and could spend more time in the red rock landscape.

The state park has two campgrounds with a first come, first served policy. While we generally kept our plans loose while traveling full time, we did like to have a place confirmed before we arrived and avoided no reservation situations. In this case we figured we’d give it shot;  if the campgrounds were full, there were RV parks less than 20 miles away.

If you’re planning a day trip from Vegas, be prepared to leave early or to wait in backed-up traffic at the one-lane entrance point. We lucked out with our timing by arriving mid-afternoon and missing the crowds trying to enter. (In retrospect, this was probably also a good time to arrive after campground sites have been vacated.) When we left the next day, around noon, traffic was backed up a couple miles. Even without traffic, the last 15 or so miles to the park after you exit I-15 from Vegas are slow going: a narrow, winding, two-lane road in not great conditions. Chris had no problem obeying the low speed limit in the RV. It was a white-knuckle drive, but we were rewarded with a dramatic view over the valley at the park entrance. I really really hoped we’d be able to find a spot to stay overnight.

The campgrounds are adjacent to each other and only a couple miles from the entrance, although only one, Atlatl Rock, has spots large enough for our 36-foot motorhome. I waited in the tow car while Chris slowly ambled over the campground loop road. Some of the spots that could accommodate our rig were unoccupied, but had tags on the site signpost indicating a later check out date. We thought we were out of luck, until a volunteer helped us find a spot that was tagged but only paid through the previous night. We were willing to risk a confrontation if the party returned. While Chris backed in, right up to a sheer wall of bright red Aztec sandstone, I filled out an envelope and tag, dropped our payment in a lock box, and claimed the spot. (It was helpful to have the correct change on hand – $10 after deducting the $10 entrance fee we already paid for a site without hookups.) 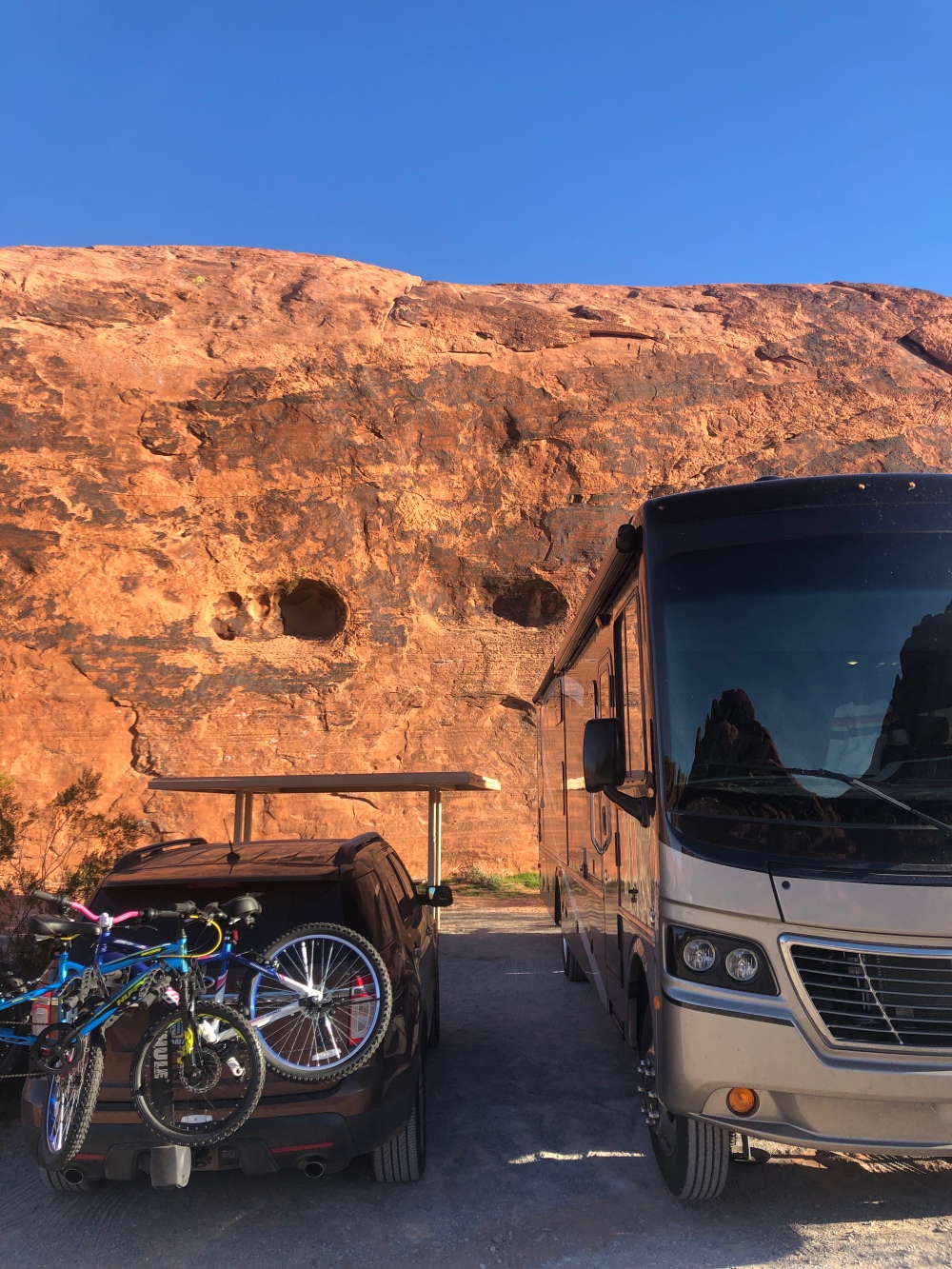 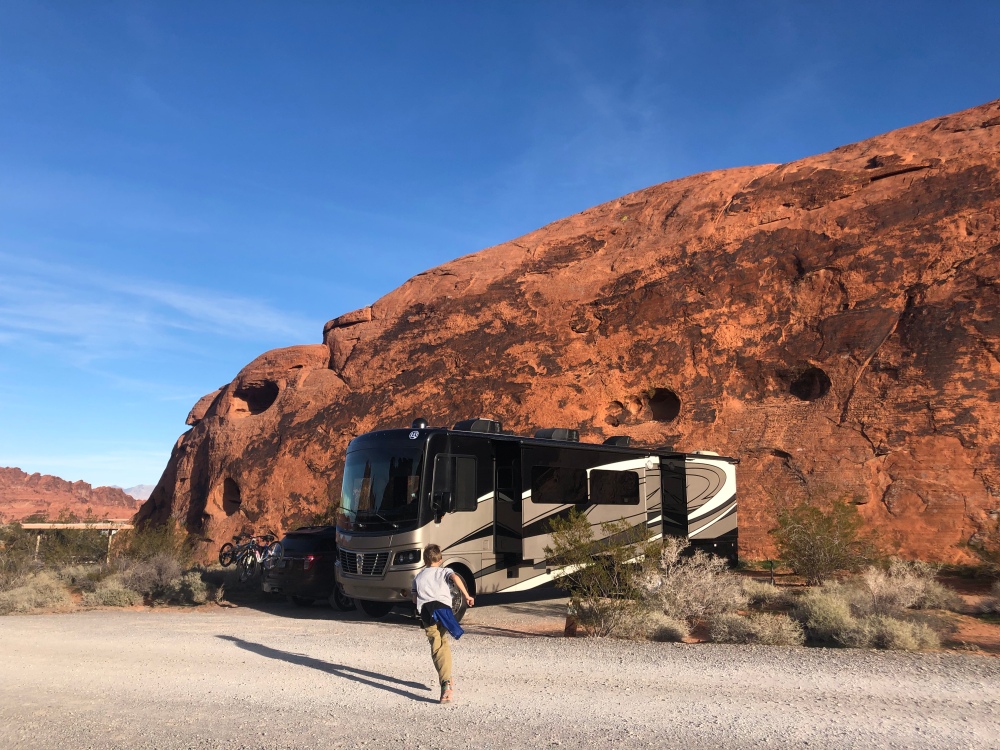 As thrilled as we were to be staying overnight in this dramatic red rock canyon, things got even better as soon as we left the campground to drive to the visitor center. We spotted a small herd of bighorn sheep right next to the road (Thanks to Rita exclaiming, “Bighorn sheep!” and Chris making a quick U-turn.) We learned about bighorn sheep at a few National Parks, and finally saw a pair at Badlands, but only from a distance. And this wouldn’t be the only sighting!

After picking up junior ranger books and exploring a short trail near the visitor center, we drove to nearby Natural Arch and Atlatl Rock before returning to the campground for dinner. 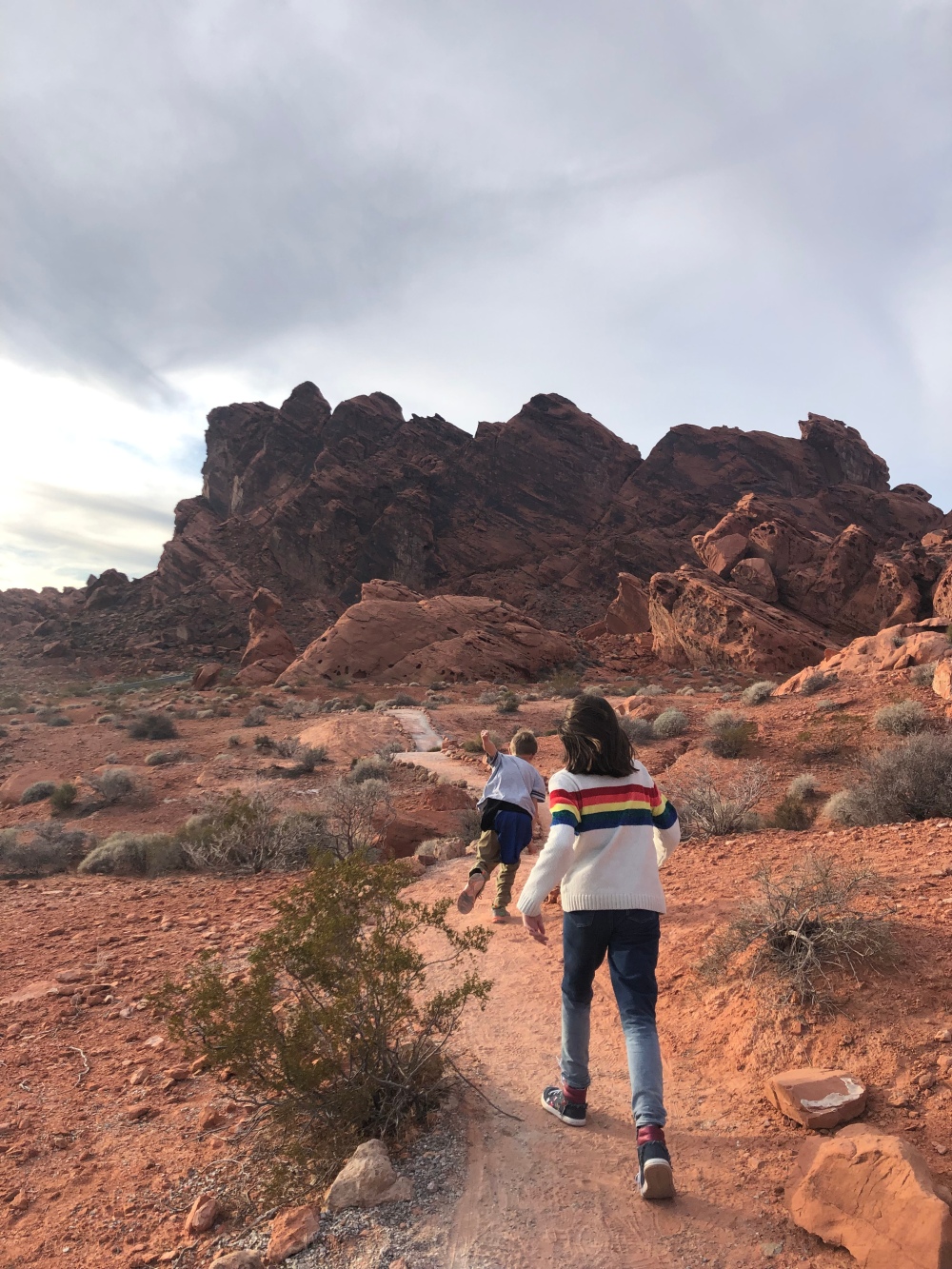 I couldn’t get enough of our surroundings, and went for a walk with Rita and Sky while it was still light out. It was incredible to just walk into the canyon behind the campground, scrambling over rocks and having the place all to ourselves. 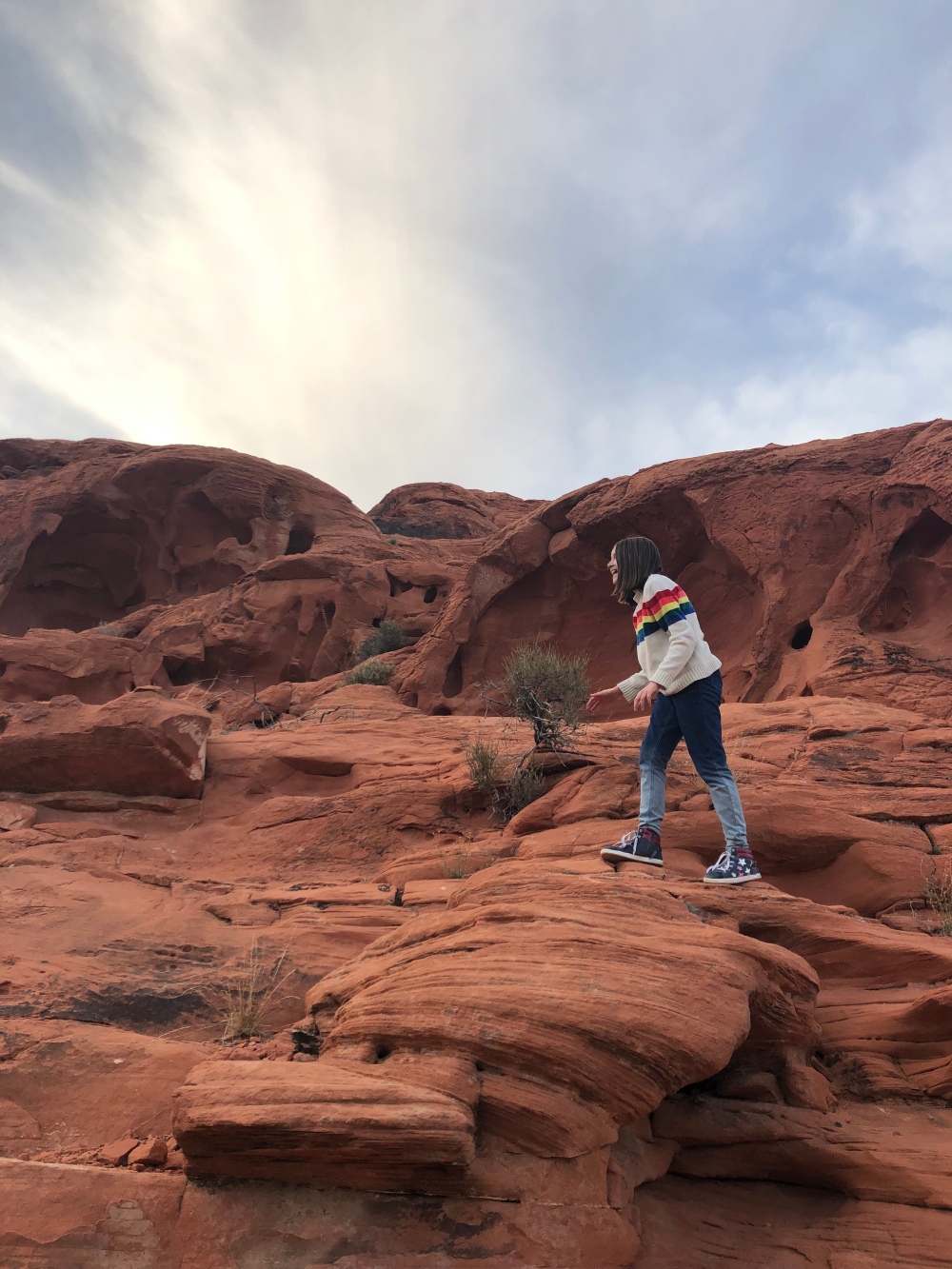 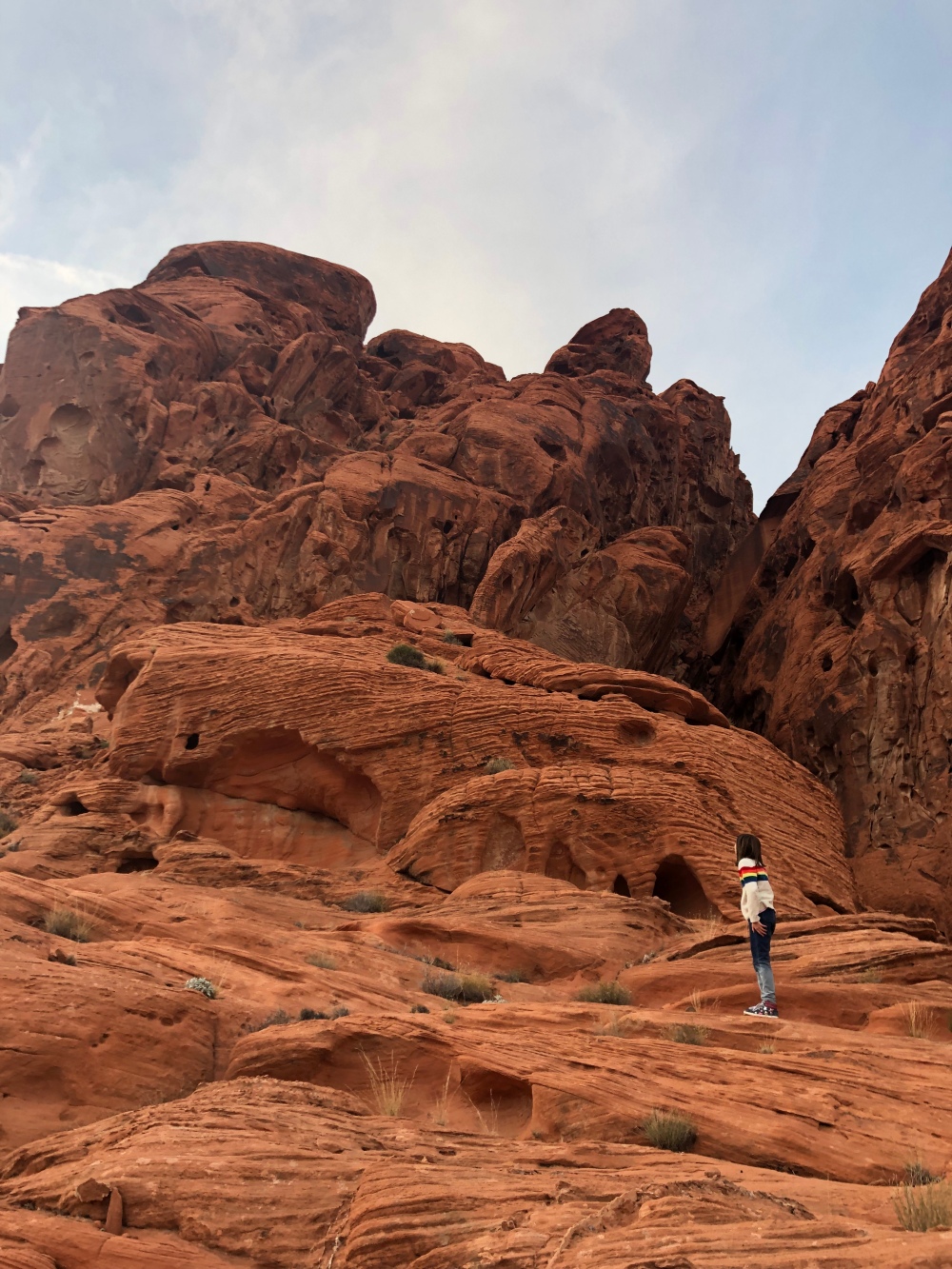 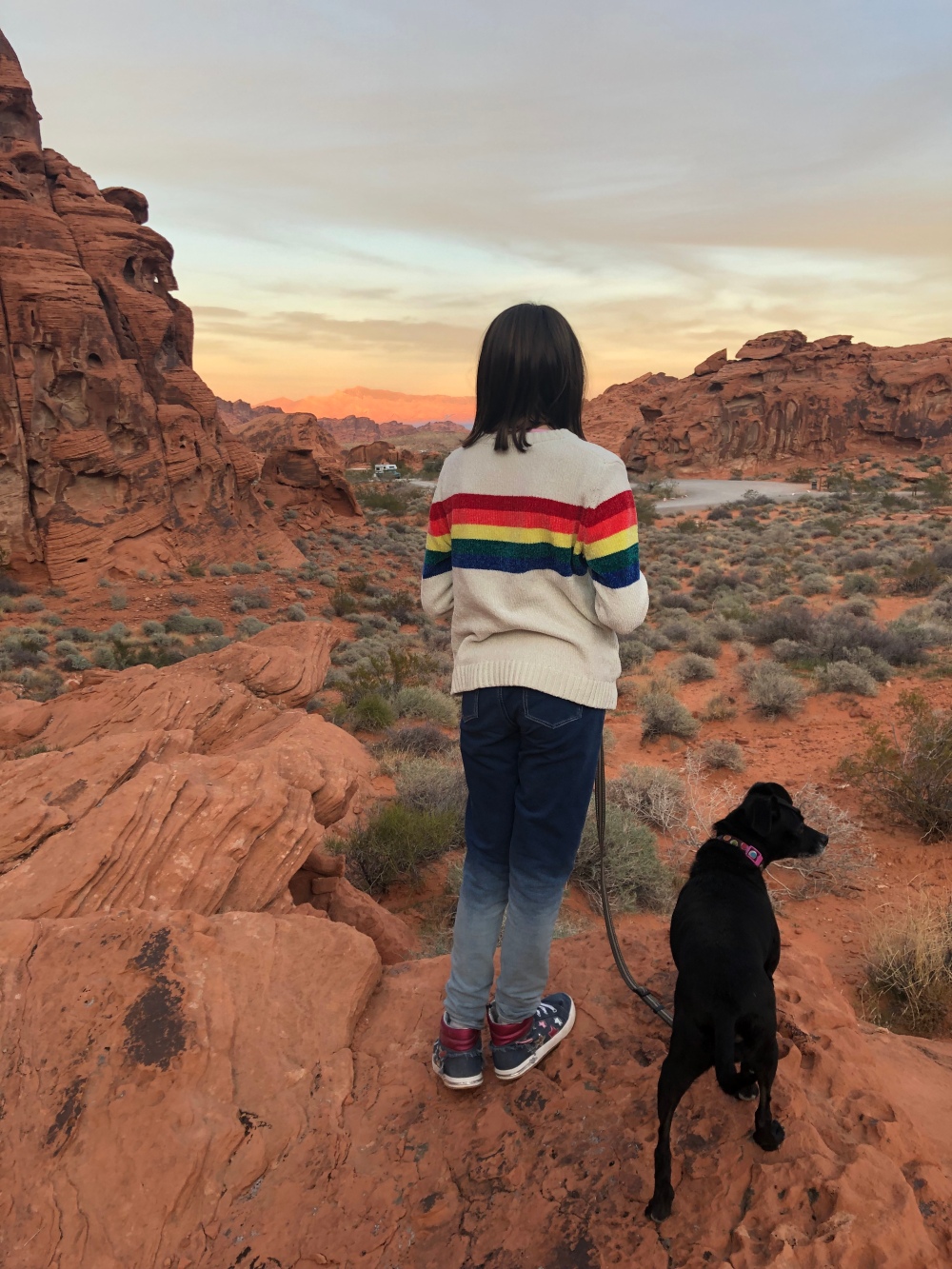 We were headed back to the RV when Rita spotted a bighorn sheep in the brush in the middle of the campground. We lost sight of it for a few minutes, but then it appeared again in a campsite, and, to our astonishment, climbed straight up a boulder right in front of us. It was so quick and sure-footed; I know I saw it happen but can’t say how it got up to the top. Chris and Charlie, and a few other smitten campers, joined us to watch as the sheep made it’s way up and behind the rock wall of the campground. 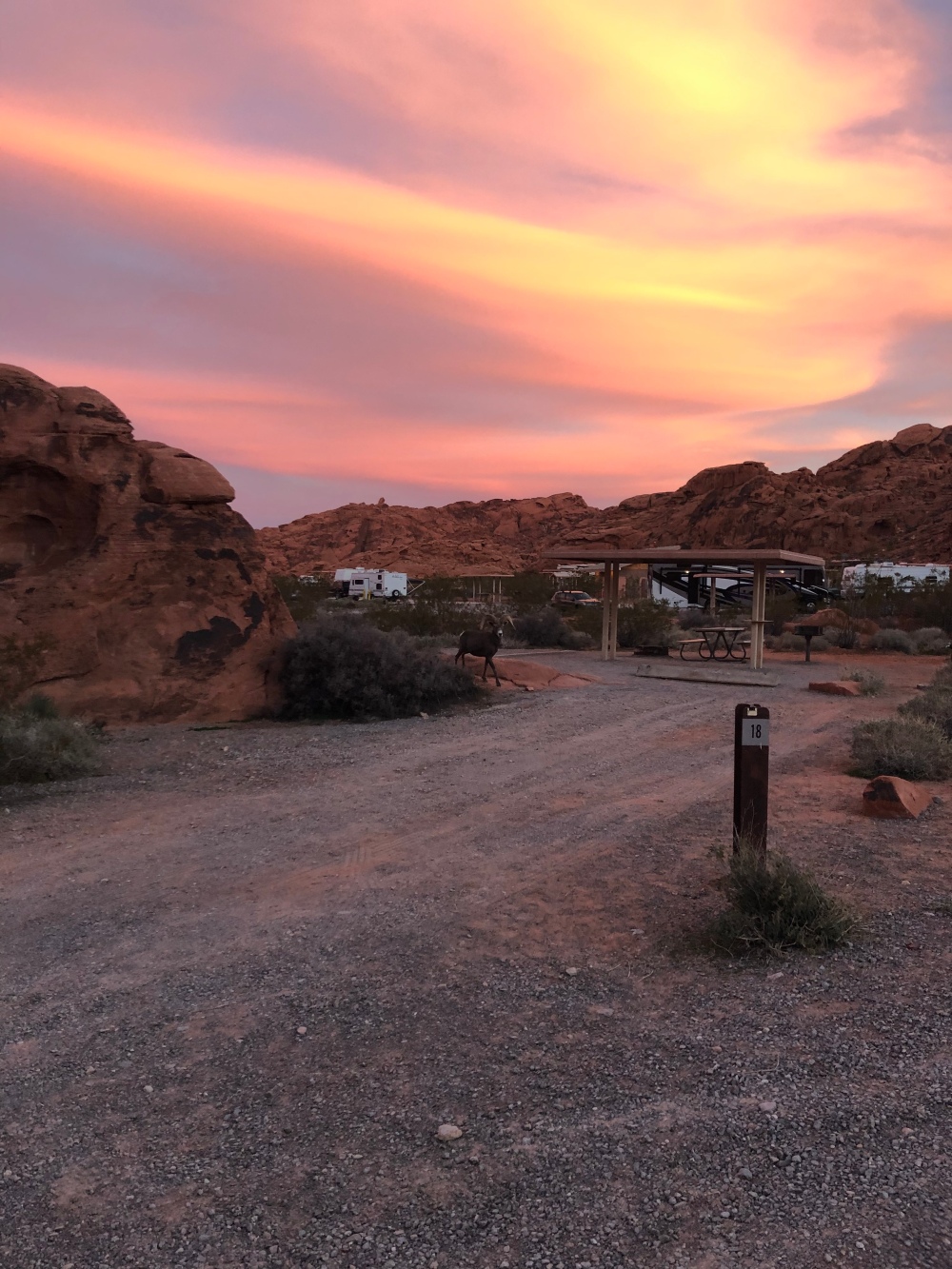 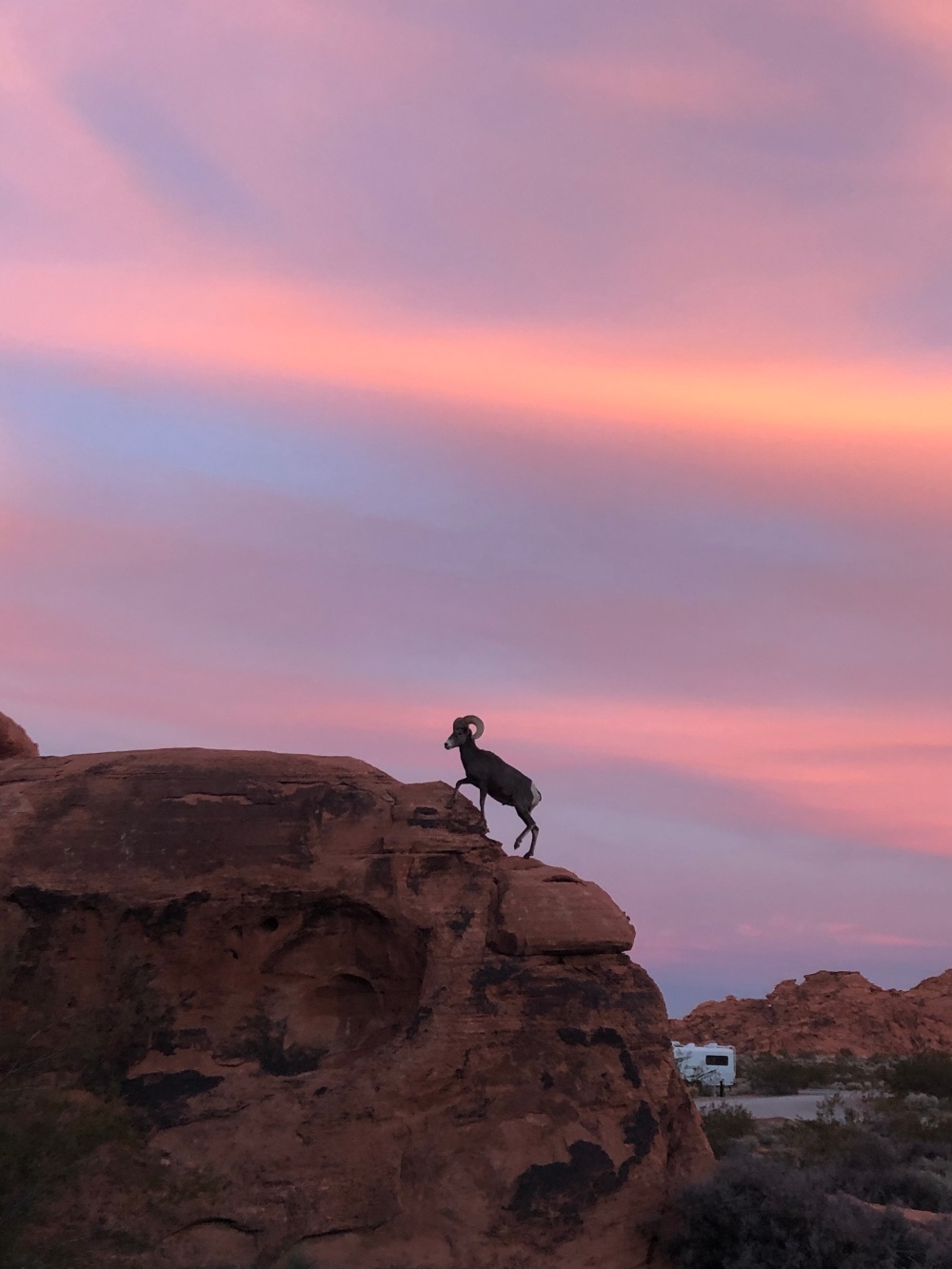 I was excited to get an early start in the morning to soak in as much of our surroundings as I could before moving on. When it was light out, but the canyon still in shadow, I walked up into the rocks behind the campground again. In addition to the natural beauty, we were surrounded by a sublime silence that was even more profound in the early morning. It was magical.

Once everyone else was awake and fed we headed out to explore what really drew me to Valley of Fire in the first place: Fire Wave. THE Wave rock formation, a familiar desktop wallpaper image, is located in the Vermillion Cliffs National Monument on the Utah/Arizona border. It’s accessible by a 5+ mile hike and only to those holding one of the 20 highly-competitive permits available each day.

We’d love to get to The Wave some day, but in the meantime Fire Wave is an incredible experience in its own right and much easier to get to. Of course, this also means it’s going to be more popular and potentially crowded. To our pleasant surprise, even though it was the weekend before Christmas, at 9am there were few other cars on the road and only a couple other people at Fire Wave. (So few, in fact, that we got a little lost and weren’t sure if we found Fire Wave or not.) 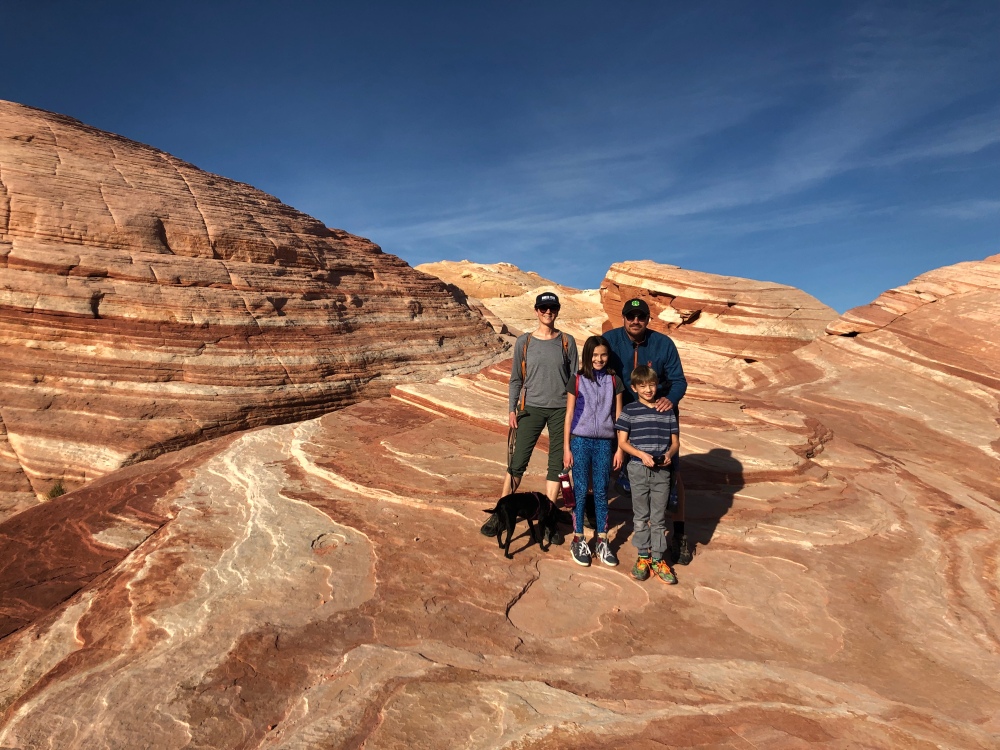 We spent a couple hours exploring, and still had time for two more stops before heading back to the RV and getting on the road. 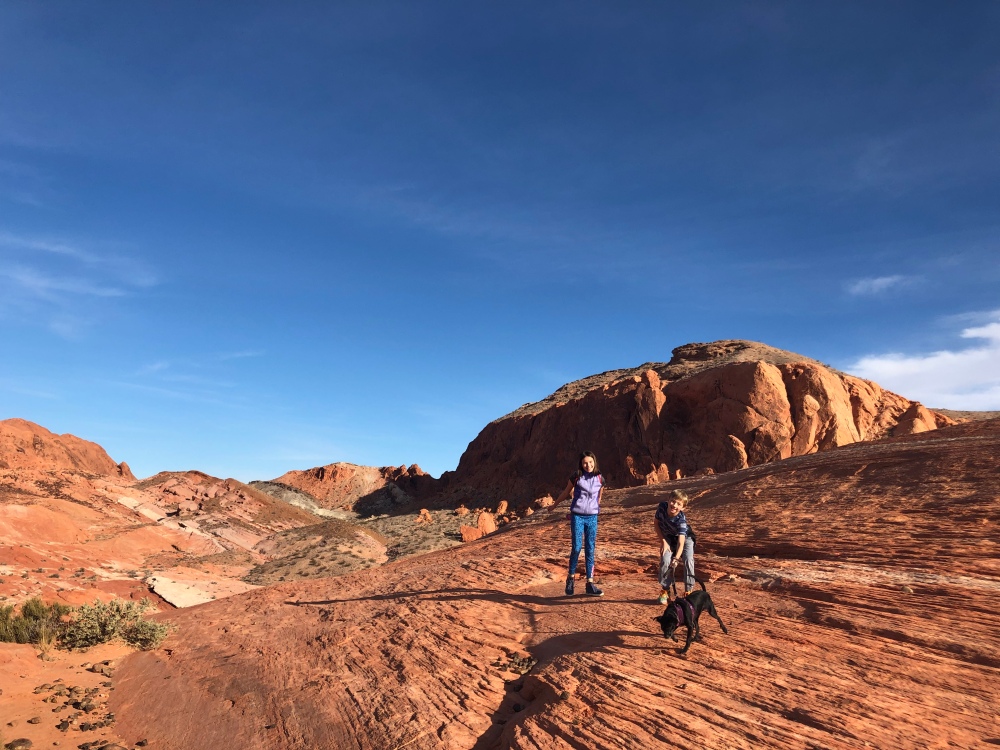 We were only there for less than 24 hours, and even though it’s a relatively compact park we missed some of the sites and hikes. But Valley of Fire gave us incredible memories and became one of our favorite parks in that brief time. We can’t wait to go back! 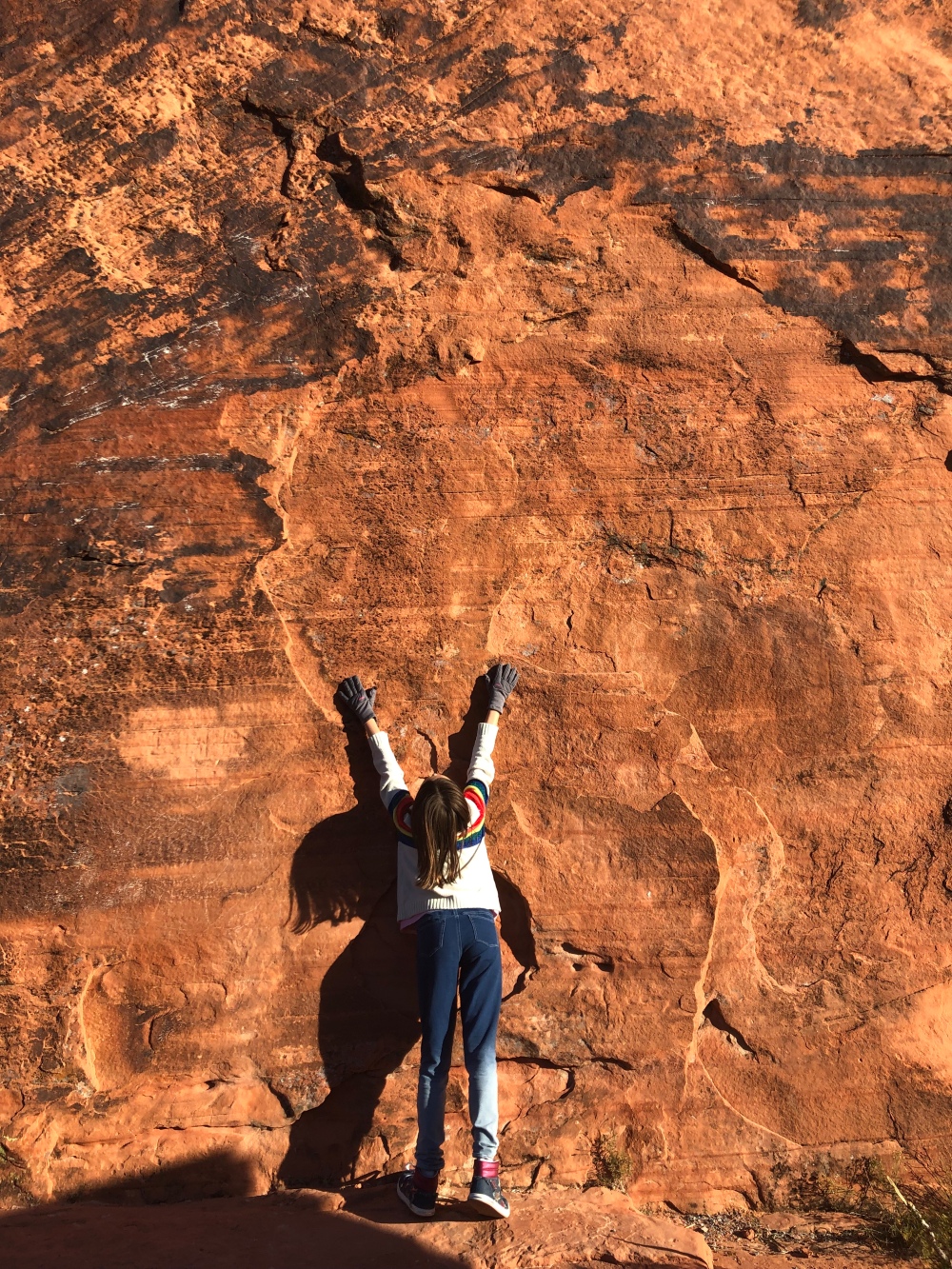