Now, where did we leave off? I knew it had been a while since my last blog post, but didn’t realize it’s been four months already [edit: make that five since I started this draft a few weeks ago]. Not to give too much away in advance since I’m trying to finish this travel narrative, but my excuse is that we’ve been settling into a new routine of school and work and looking for work, and getting used to living in a house again in a new city: we decided to settle in Reno, Nevada for a while. It’s going great, but for now I’m going to pick up on our westward journey at Yellowstone National Park.

The trip from Bozeman to West Yellowstone, Montana, was an easy two hour drive. Route 191 hugged the Montana-Wyoming state line and crossed over the border into Yellowstone National Park for a tantalizing few miles. West Yellowstone is a major tourist town. But the location can’t be beat, and it has history, charm, and local attractions in addition to chain hotels and restaurants. We settled into our RV park, which got away with being basic for the cost since it’s located right in town and adjacent to the Park entrance. The kids got a kick out of crossing into and out of the National Park next to the posted signs on the border.

We decided to take advantage of our early afternoon arrival to explore a bit of Yellowstone. Which is huge. The world’s first National Park, established in 1872, has five entrances and 10 visitor or information centers throughout its 3,400 miles. There is so much to Yellowstone in addition to Old Faithful and bison (although those are awesome).

We drove 40 miles from town to the Grand Canyon of the Yellowstone Visitor Center, passing through towering pines and expansive meadows. We were all excited to get our first glimpses of bison, elk, and fields of steaming geothermal pools. The two-story Grand Canyon Visitor Center was attractive and engaging, although we were surprised to be charged $3 for each junior ranger book. It was the first time we had to pay at any National or State Park.

Without time for a hike, we decided to stop at Upper Falls first. We heard the roar of the Yellowstone River before it came into view after the short walk from the parking lot. The rushing river wound through a narrow channel hemmed in by forest, then widened after a dramatic plunge over the 109-foot Upper Falls. As awe-inspiring as this close-up view above the falls was, Lower Falls took our breath away. The river cascades down a 308-foot drop (for comparison, Bridal Veil Falls at Niagara is 180 feet) into a steep and narrow canyon, with glowing ochre rock topped by a thick line of dark green pine and juniper trees. 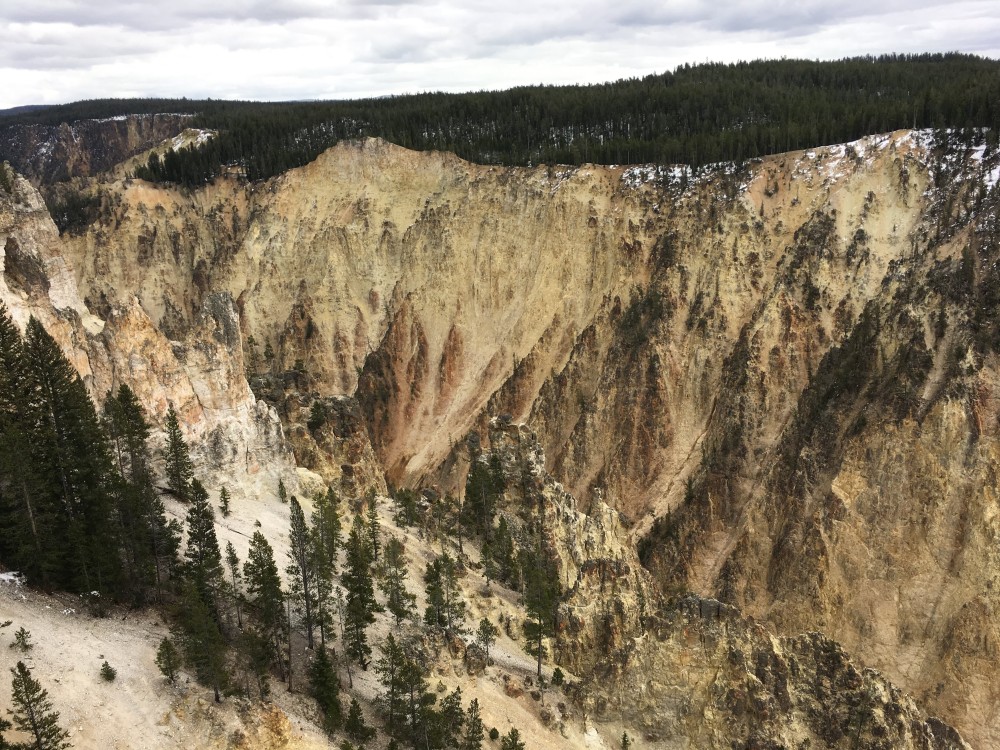 On our way back home we stopped at Norris Geyser Basin – the hottest and oldest thermal area in Yellowstone – for our first walk around the other-worldly (and slightly smelly) geothermal pools. We also experienced our first bison traffic jam, which was quite exciting. 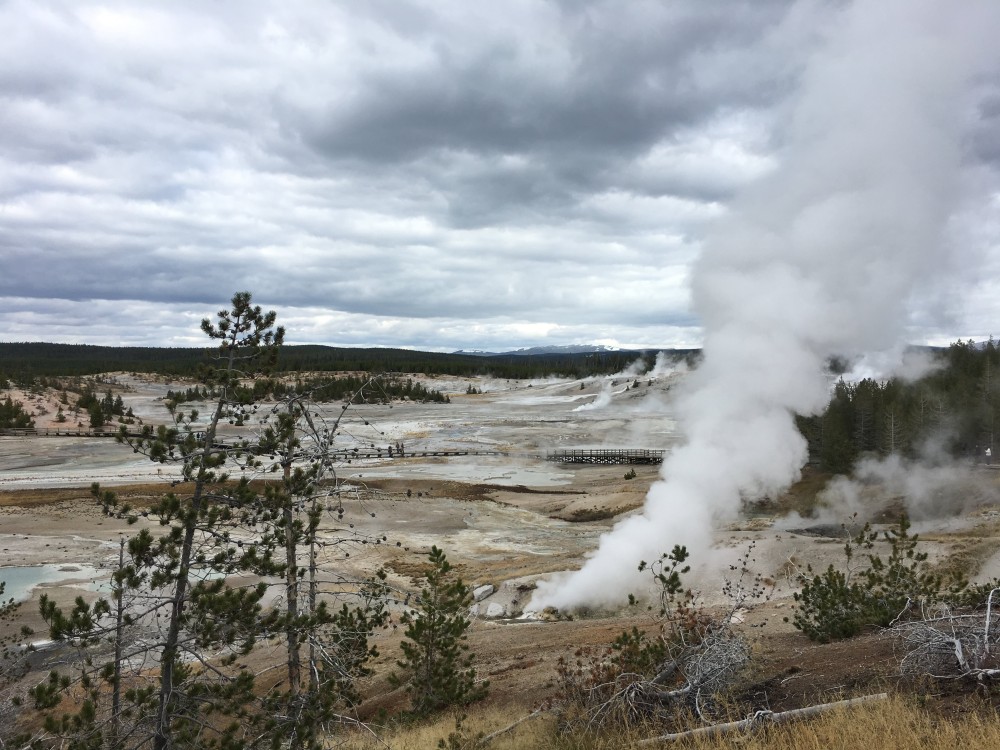 The next day we drove back into the Park and hit the favorites: Grand Prismatic Basin, Old Faithful, and Yellowstone Lake. While we were happy to miss the summer crowds (especially when there’s a bison traffic jam), it was still a surprise to see so many tour buses on a Tuesday at the end of September. Nonetheless, these natural wonders lived up to the hype and were unforgettable to experience in person.

Grand Prismatic Spring is the largest hot spring in the US, and the third largest in the world. The spring itself is about 370 feet in diameter (10 feet longer than a football field), with 189 degree water bubbling up from depths of 121 feet. The incredibly clear and vivid cerulean blue color is due to a lack of living organisms, but what really makes this an unforgettable sight, and inspires the name, are the rainbow colors that ring and snake out from the edges of the spring. While the colors are so fantastical they seem artificial, or divine, they are 100% natural thanks to a variety of heat and mineral-loving bacteria. 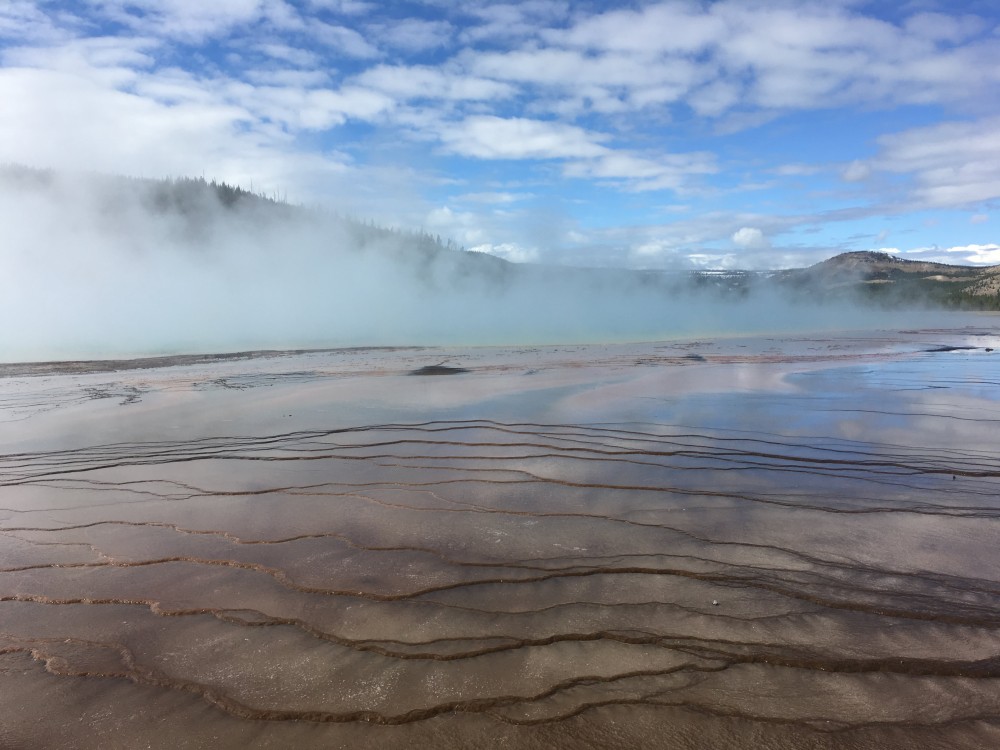 The effect of Grand Prismatic is best viewed from above, something we didn’t get to do. We were trying to push on to Old Faithful, and instead of walking to the new overlook, we spent a good hour exploring the network of boardwalks around Grand Prismatic. One thing to note: the lack of railings on the boardwalks enhance the views, but also the level of anxiety if you are accompanied by kids who are newly mobile or have a tendency to bolt.

If we were better planners, and more motivated in the mornings, we would have left early and driven straight to Old Faithful. Instead, we ended up there at 1pm, peak tourist time. The Old Faithful area includes a Visitor Center, lodges, and shops, which also makes it a peak lunch stop. (I did plan ahead and pack sandwiches at least.)

Fun facts: The famous geyser erupts about 17 times a day, and can be predicted with 90% accuracy within a 10 minute window. The predicted times, posted in the Visitor Center, are based on the length of the previous eruption; intervals between eruptions can vary from 60 to over 100 minutes.

Our timing worked out well, with a ranger talk starting at the geyser 30 minutes before the next “showtime”. There were already plenty of people sitting at the extensive rows of benches that line the rim, but we were able to get seats in the second row near the ranger. It was fun to learn more about the geology and history of Old Faithful right before it errupted, even if this was one of the most distracting ranger talks we’ve experienced. There were people filling in the benches, vying for photo angles, and chatting away the entire time.

Everyone settled down as the expected time approached. As distracting as the big crowds could be, there was something special about being with hundreds of people from all over the world all watching a hole in the ground, waiting for something to happen. It felt like the anticipation before a fireworks show, made even more remarkable by the fact that this was a completely natural phenomenon we were waiting for, studied and measured but not controlled by humans. Sure enough, just a few minutes after the predicted time, water started shooting up out of the ground, first in short bursts then in dramatic, powerful flumes that drew gasps from the crowd. It was exactly what we expected to see, and absolutely delightful.

I’m sure there is beauty and solitude to be found on the trails that lead from Old Faithful, but we didn’t stick around to find out. As soon as the show was over, we hightailed it out of there to try to beat the crowds out of the parking lot. The magic was momentary, but still memorable.

Another 20 miles led us to the West Thumb Geyser Basin, the first stop coming from the West at Yellowstone Lake. The sublime view of deep blue waters ringed by mountain peaks was similar to Crater Lake, another caldera lake about the same size as West Thumb. However, the geothermal pools gurgling and steaming right up to the lake’s edge made it a distinctly Yellowstone place. West Thumb is actually a caldera within the larger Yellowstone caldera. 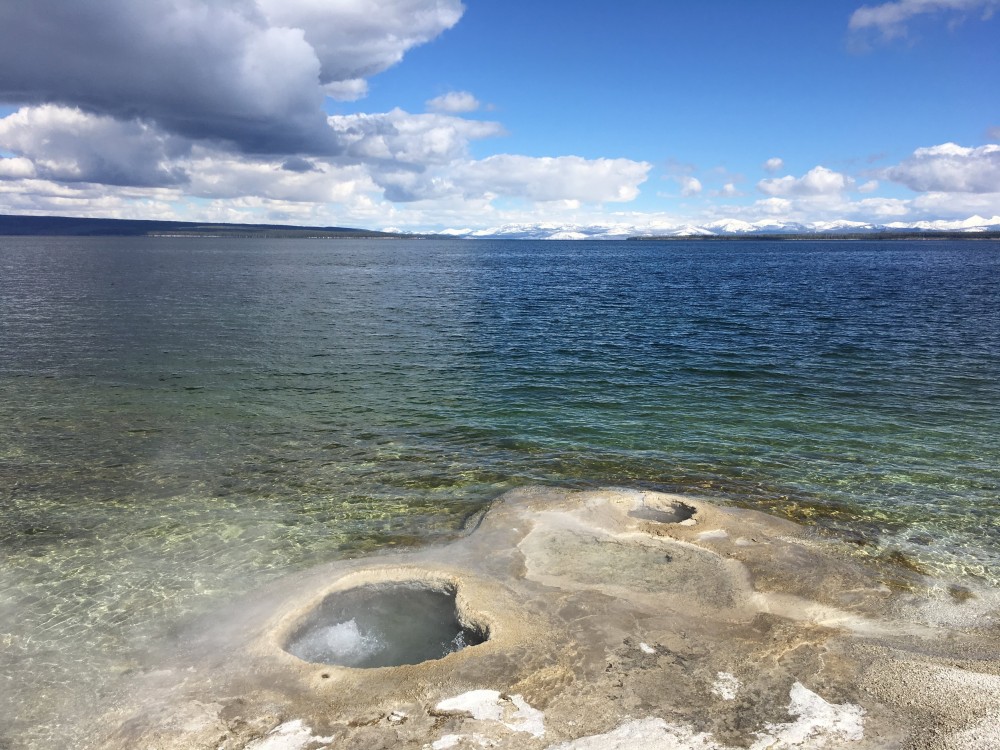 We took it easy our last day in West Yellowstone. While Chris worked, the kids and I went to the Visitor Center nearby to get their junior ranger badges, and to the small town library. We all enjoyed a last foray into Yellowstone together, taking a family hike along a trail that led straight from town, through forest thick with delicate, towering pines, and along the Madison River. While not as spectacular as the geothermal wonders, this unremarkable corner of Yellowstone was beautiful, diverse, and we had it all to ourselves.

Next up: Falling hard for Grand Teton National Park and Jackson, Wyoming.